Blue light: What solutions for what dangers?

What is blue light, how does it affect us and how can we protect ourselves?

If you spend several hours on a daily basis, in front of the screen of your smartphone, computer or other device, you are exposing yourself to the blue light in a major way. Not to mention the consequences: migraines, sleep disorders, visual fatigue, premature aging of the eye ...

So what is blue light, how does it affect our eyes (and our brains) and most of all, how do we protect ourselves against it in an efficient manner?

Light plays a very important and beneficial role in your life. While it is indispensable to the body, some of its components can alter your sight capital.

On the "rainbow" spectrum of visible light (graph below), blue light is divided into two very different types of radiation.

On the one hand, "blue-turquoise" light (from 455 nm to 495 nm) is recognized as vital to the body. It contributes to our awakening, falling asleep and general well-being.

On the other hand, blue-violet light (from 380 nm to 455 nm) accelerates the aging of our cells. Partly filtered by the crystalline lens, it penetrates deeply into the eye and strikes the retina on its central part. It is precisely this small area that processes 90% of the visual information your eye receives.

The shorter the wavelength of a light, the more it weakens the eyesight because it produces a large amount of energy

The sun emits this blue light, just like LEDs ... and of course, screens, regardless of their nature... Blue light is omnipresent in our daily lives, at work, during our leisure activities and anywhere else. However, it shouldn’t be taken lightly and the evidence of its dangerousness has been piling up as the years have gone by.

More digital also means more sitting time in front of the screens, regardless of the context: family, personal or professional. These are everywhere, this is the proof that we spend an average of 2000 hours in front of a screen every year and we consult our smartphone 58 times on a daily basis. 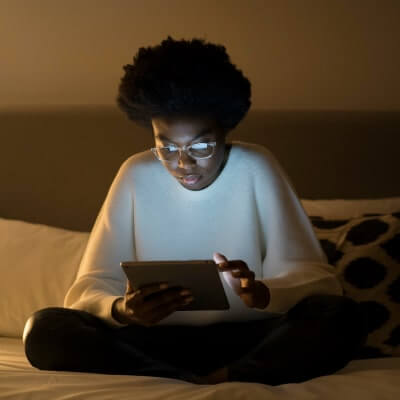 There are several harmful effects and range from difficulty to fall asleep and focusing, headaches, visual fatigue and an increased risk of AMD (aging of the retina).

According to several studies , blue light could influence our biological clock and make a negative impact on sleep cycles.

So, how do we limit the impact of screens on visual health, as we cannot seem to make do without them? By getting equipped with the required glasses, because this is now possible with certain pairs of blue light glasses and screen glasses.

Fighting against the unwanted effects of blue light of screens seems to be turning into a priority, but to make way in this fight, you need to get to know your enemy properly.

Blue light is bad for the retina, but also for the entire body. Here are the main consequences of prolonged exposure to blue light.

Visual fatigue which seems to be trivialized

Blue light produces a lot of energy and it tires out the exposed eye in a major way. When you are working on a computer, if you feel the need to reduce the brightness or to play with the contrasts, it means you are experiencing visual fatigue. The same applies if the sight becomes blurry, eyes seem dry and itchy, pain is felt in the neck as you move forward to bring relief, when your eyes seem to encounter issues.

70 % of adults who experience visual fatigue, don’t do anything to overcome this problem..

Ophthalmic migraines (or “auras”) are binding headaches. This is related to visual fatigue, these happen due to visual discomfort: the retina forces to process brightness and adjust, which reduces irrigated blood flow to the eye and causes pain..

Spending too much time in front of the screens, impairs the ability to focus. It’s not related to visual fatigue, but to the brain this time. Information travels faster on screens and we are exposed to thousands of stimuli in a short amount of time. The secretion of dopamine (hormone of the reward system) is stimulated.

Screens are favored by the brain, but also this thought system, which is based more on immediacy than reflection. One gets tired more quickly and you lack attention: in short, next to screens, everything seems dull and boring (and it's often through the subconscious).

AMD is an eye disease caused by aging of the retina and the eye generally speaking. It corresponds to a decline in visual skills, through the appearance of black spots in the visual field, sometimes up to partial visual impairment if the treatment is not fast enough.

Prolonged exposure to blue light is also known to destroy photoreceptor cells in the retina. Thus, it seems to be the main factor in the anticipated destruction of visual qualities, leading to an increase in myopia in younger people, mostly.

Blue light increases the activity of photosensitive cells, which means it "makes the body and brain believe" that there is always daylight and that it isn’t the time to sleep.r. 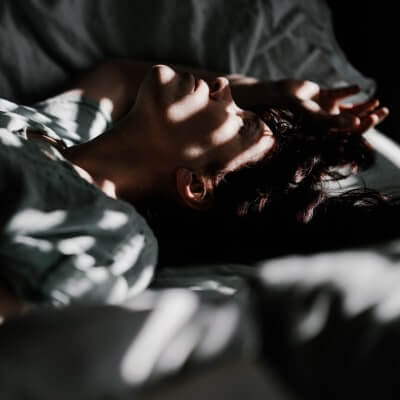 Between sleep disorders and insomnia related to blue light, some people suffer from fatigue that gets worse as the weeks go by. The production of melatonin (the sleep hormone) decreases, which prevents the brain from going into the sleeping mode.

How to protect yourself effectively from blue light?

The good news is that as one is raising the awareness of the dangers and risks of blue light, accessible solutions seem to appear within reach.

For people who work all day at their computers, here are 3 exercises to practice today:

Improving your sight, the health of your eyes and reducing the risk of AMD also takes place through food: spinach, carrots, fish, citrus fruits, avocados or almonds are recommended because of their zinc content, iron, omega 3 or antioxidants.

In terms of solutions against the effects of blue light for sleeping, extremely positive effects have been demonstrated by wearing low wavelength glasses several hours before sleeping: in terms of melatonin, on falling asleep and on sleep’s quality.

Cutting down or even stopping to look at any screens at least 1 hour before going to bed, is also a good way to avoid sleep disturbances and insomnia. Sometimes it is easier said than done, even though…

These lenses filter light from the screens and reduce the impacts of screens on the eye, by filtering a major part of blue light. How? Thanks to a light color filter that counterbalances the blue light, allowing the reflection of blue-violet waves that are harmful to the retina.

It’s simple : these lenses are for blue light what sunglasses do for UV in direct sunlight. However, just like with sunglasses, the quality of blue light blocking lenses varies depending on the manufacturer.

Focus on Nooz lenses with optimal protection and little tinted 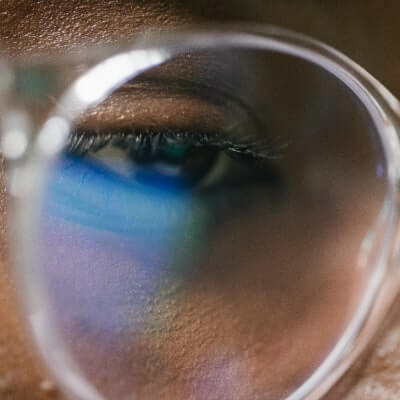 Nooz lenses have the peculiarity of offering a high filtering power, which is currently one of the most effective on the optical market.

Another key point is the tint of the lenses: our blue light filter lenses are not very tinted, almost invisible unlike many lenses of this type. By nature and to fulfill its function, the glass is indeed yellow tinted, which can unfortunately have an unattractive effect.

Fighting against the harmful effects of blue light is an emergency due to the public health problem it seems to represent. Fortunately, without being able to drastically reduce the position screens hold in our lives, we now have effective ways of protecting ourselves from overexposure of blue light.

Nooz’s elves have a surprise for you...