Discover the universe of the French illustrator

The clear line is a graphic language from the Belgian school of comics gathered around Hergé, that is to say the "Tintin style". The term clear line was invented in 1977 by the Dutch cartoonist Joost Swarte, on the occasion of the Tintin exhibition in Rotterdam. Characterized by a black ink line of constant thickness, it is easily recognized.

For Jean-Michel Tixier, each drawing tells a story, a state of mind, hidden behind an apparent simplicity. The humor and irony he uses make him one of the most talented artists of his generation.

That's why every week since October 2014, "M" - LE MONDE gives carte blanche to the illustrator in a section called "Ligne de mire", his comic, grotesque or ingenuous characters deliver an offbeat vision of current events.

After exhibiting at Colette in 2016, and in Lyon at Autour de l'image and Felix Gagnaire in 2017 - 2018, the iconic illustrator of the ligne claire was present all winter 2018 -2019 at the Mont-Blanc Hotel in Megève with his exhibition "Calèches & Crustacés". The artist also exhibited his 100% cinematic works during the 2019 Cannes Film Festival as well as in Melbourne in 2019.

He has also partnered for years with world-famous brands such as Lacoste, Le Bon Marché, Hermès or even Birkenstock to create unique illustrations filled with humor.

You can now discover the limited edition in collaboration with Jean-Michel Tixier.

What was your inspiration for these illustrations?

I wanted the drawings to play with the band that surrounds the box as well as the case. Kind of like a loop where the beginning and end of the story come together. That was the first idea I had.  I then declined the concept into 3 illustrations for the 3 different products of the brand.

Can you tell us more about your Nooz creations?

Once I had the concept of the "loop" I just had to find the 3 stories to tell.

I always ask myself the same question: how to be understandable while being absurd. I really like the idea of "logic not logic"! 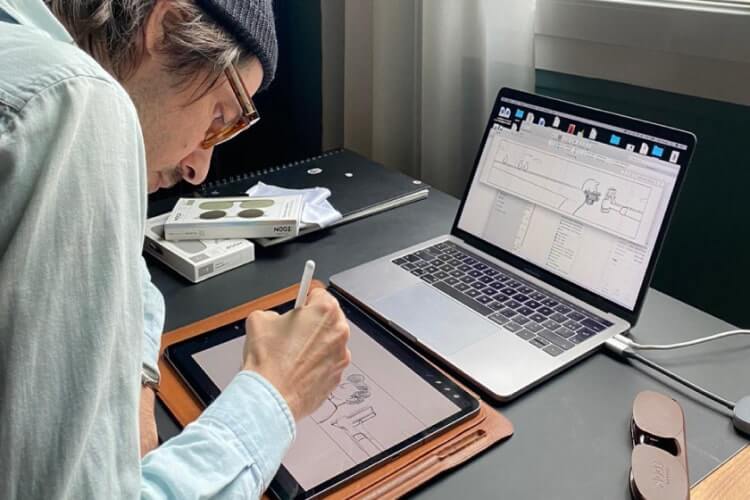 The important thing was to understand the usefulness of the 3 products in everyday life, and I liked the idea of the 3 characters who make so much effort unnecessarily.

What were the different steps to realize these illustrations?

The steps are always the same in my work process. I spend half the time researching ideas, writing down everything that happens, down to the smallest detail. I then script my drawings.

The rest is the creative process between sketching, inking and coloring. 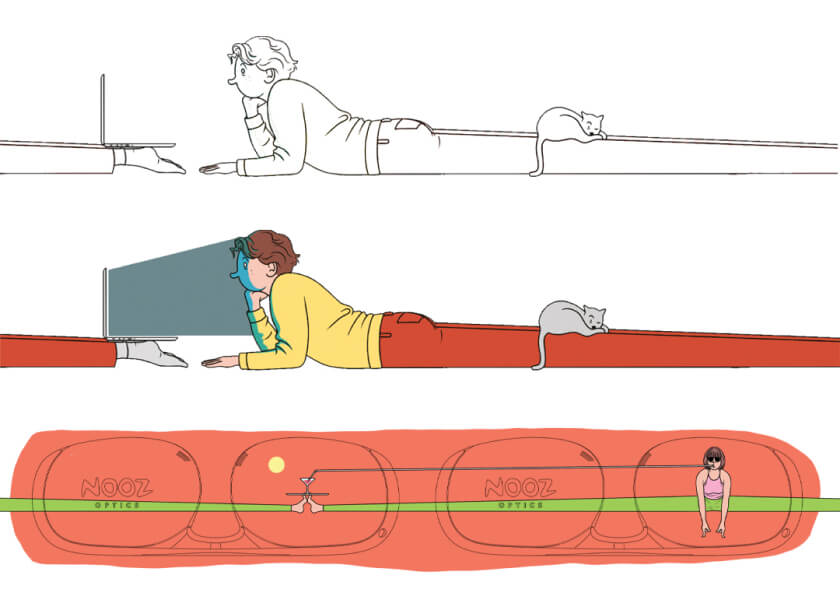 You are now used to this type of project, can you tell us a few words about your background?

I am self-taught. My career is mostly linked to important encounters. I'm thinking of the Record Makers label, I worked on the 1st album of Sebastien Tellier and with other artists of the label. It was a period where I worked essentially in music.

Much later, came the 2nd highlight of my career: the collaboration with "M le Magazine du Monde". They gave me carte blanche and offered me a full page every week for 5 years. Some 250 drawings later for the magazine, I did an exhibition and the window dressing of the Colette concept store in Paris.

Could you choose THE most memorable moment of your career ?

It's hard to pick just one...but I'm going to say the AIR tour in New York with Sebastien Tellier as opening act. His very first concerts. I was young and I was discovering a lot of things...It was crazy!

We need to know more! Do you have any other anecdotes to tell us?

A gastronomic Monday that started at 12am and ended at 2am.

It was the day I made my first collaboration with the chef Pierre Gagnaire orchestrated by Junior Parado "Junart". After a professional meeting, Pierre Gagnaire invited us to lunch in his restaurant Balzac. Lunch more than generous since it was 5:30 pm when we left the place, after a long digestive walk from the rond-point de l'Étoile to République, we had just enough time to take a shower to get ready for a new feast and to go to the annual Fooding party in the American cathedral.